Feminists and grassroots activists are at the frontlines of movements and solutions addressing the climate crisis around the world. They are forging pathways towards true climate justice through their stories of fierce struggle. To share such stories that center human rights, gender equality and the integrity of the environment, the Women and Gender Constituency, WEDO, and WILPF,  organized a  “Feminist Speak Out” on November 12, during COP27 in Sharm el-Sheik, Egypt.

The interactive panel and dialogue brought together feminists and women frontline defenders from around the world to share their stories of enduring hope and lessons on working in solidarity for change. Read on to see what the speakers and moderator had to share. 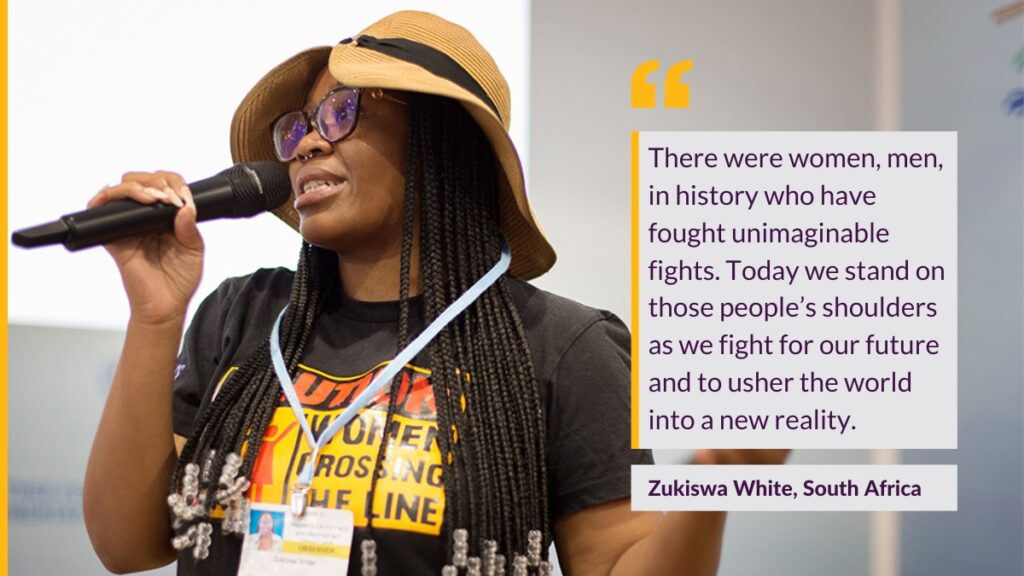 “There have been many times in history where there were big victories that people thought were not possible, but today, because of people who insisted on fighting, we know all of those things are possible. There were women, men, in history who have fought unimaginable fights. Today we stand on those people’s shoulders as we also fight for our future and to usher the world into a new reality.” 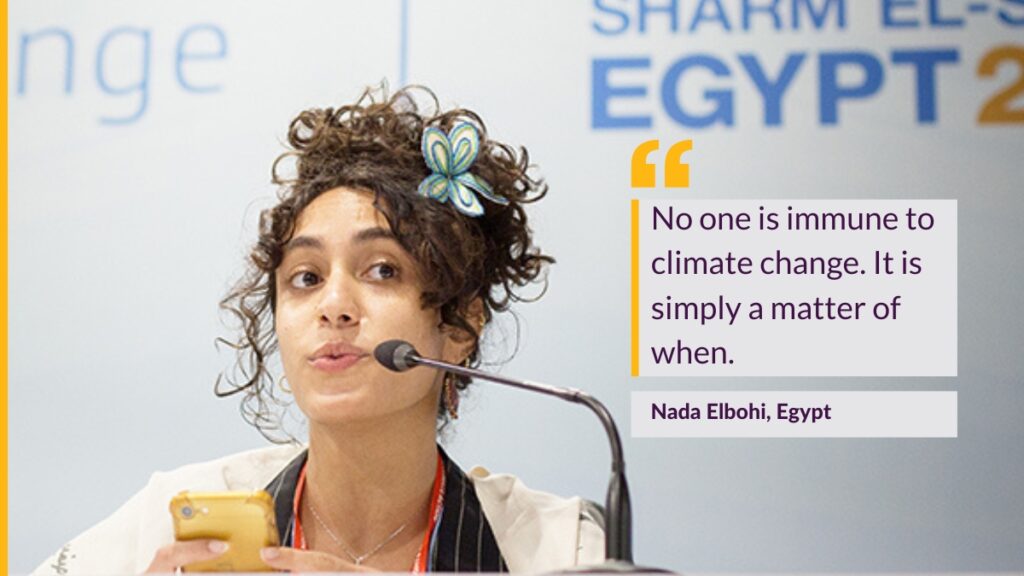 “We need you to listen to us. Listen to us when I say we are not the drivers of climate change. We have been ravaged by colonization, our internal strifes exploited, conflicts escalated by the rich countries’ greed for oil and more, destabilized for their own gains. They close their borders for us and open it for others. They refer to us as barbaric. They invade us to address our corruption that they planted the seeds for. They continue to do this under the name of humanitarian intervention, assistance, foreign aid, multilateral organizations that promote neoliberal ideologies that leave us in crippling debt. And they refocus the crisis caused by them on pollution and overpopulation. They ask and expect us to develop sustainably yet persist to be the number one buyers of fossil fuels and emitters of all greenhouse gasses.”

“There is no cooperation without justice. Libya, Yemen, Syria, Palestine, Lebanon, Afghanistan, Iraq, and Iran – many of us are already in crisis. How can we be over consuming with half of us in darkness, searching for food, falling sick from cholera?”

“No one is immune to climate change. It is simply a matter of when.” 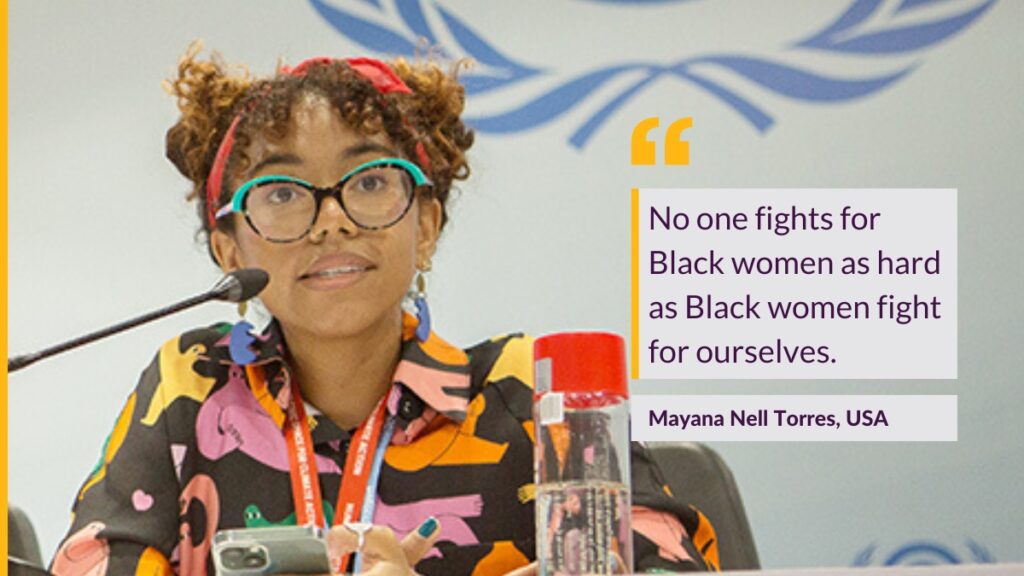 “What feminism means to me is challenging the norm in many more ways than one. As a young feminist I find it important to acknowledge the ways in which heteronormativity and racism has impacted feminism. I find it important to hold space for the queer community in its intersection with this work; how racism intersects with this work, and to make sure that my version of feminism includes us all.”

“When I dare to sit in my power and embrace all of me as a person who sits in many different identities, I am empowered and strengthened. I am strengthening my vision and hopefully empowering others to fully be themselves.” 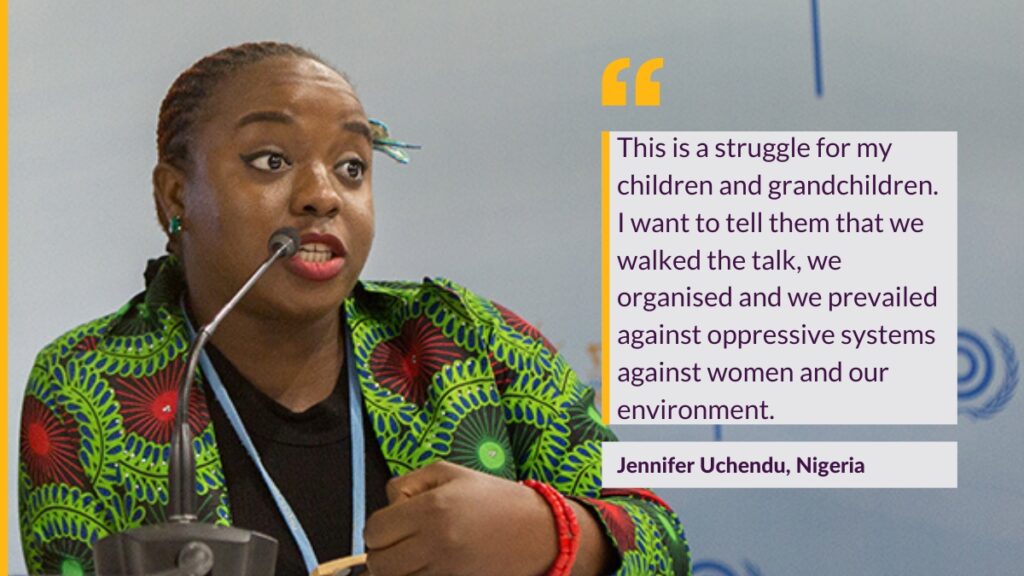 “My first COP was in 2019. I was invited as a young African climate activist doing amazing work in Nigeria. Initially, they said, ‘you have 5 minutes,’ and then it became ‘You have 3 minutes,’ and then they said, ‘Actually, can you make it one minute,’ or ‘please, 20 seconds, just say something – one word.'”

“Gobsmacked, I thought to myself – what is the point of talking as a youth feminist change-maker when people don’t really care to listen. And then I thought to myself, this is how we begin the culture of silencing and tokenism in young women.” 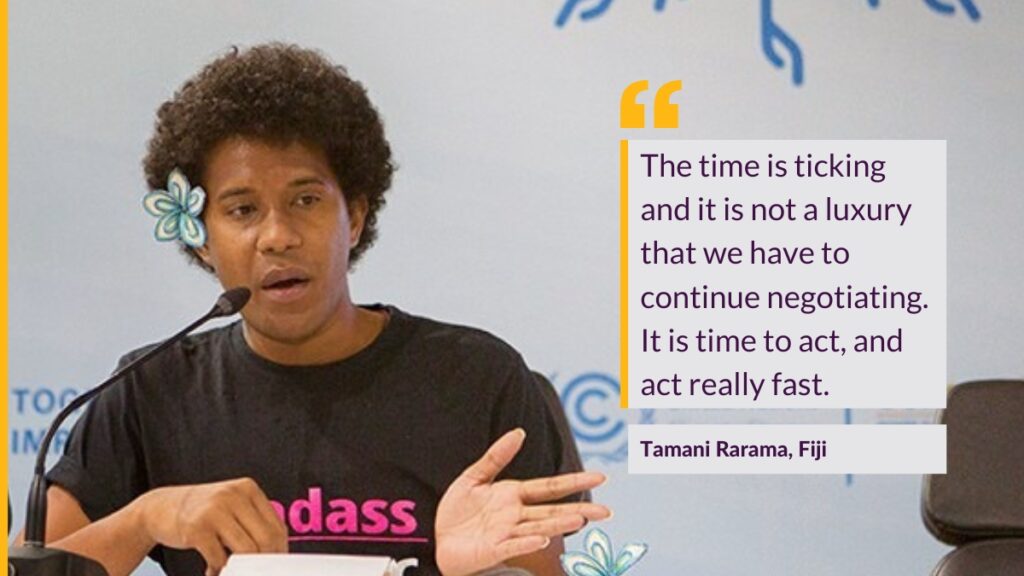 “The time is ticking and it is not a luxury that we have to continue negotiating. It is time to act, and act really fast.”

“In Fiji and the Pacific, it is the youths…the indigenous women including gender diverse people who are at the frontline of advocacy when it comes to climate justice, because we all know too well the impacts this climate crisis has on our lives. Without a healthy planet, there are no healthy people.”

“We are demanding that states ensure that the 1.5 degrees celsius limit, as they have agreed in Paris, remain as such. Anything above this limit means the loss of our homes, our lands, our culture and traditions, and this you cannot put a dollar value to compensate.”

“Alternative spaces and programs are needed in order to disrupt and positively change a system that continues to exclude and leave our people from the processes. Our diversity is our strength and through a collective approach that is intersectional, inclusive, and intergenerational we are able to catalyze policies and change archaic laws that continue to put profit over our people!” 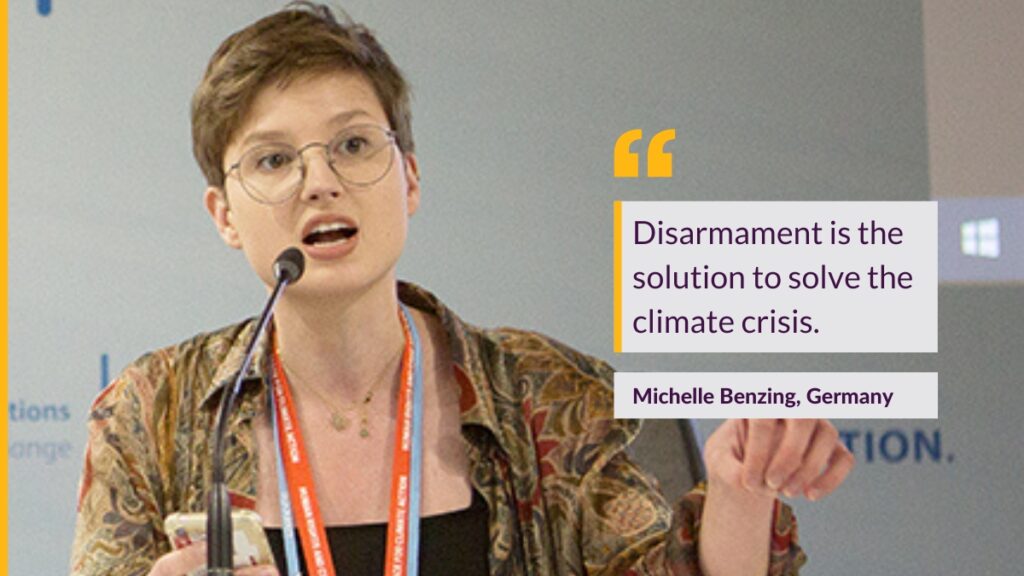 “When talking about climate justice, we at WILPF International think that it is crucial to put more of an emphasis on the intersections between the climate crisis, peace and conflict, and its gendered impacts. It is necessary to draw a holistic picture and simultaneously challenge the overlapping systems of oppression that have led to the destruction of the planet and its people – these are capitalism, colonialism, racism, patriarchy, and militarism among others.”

“It is important to achieve sustainable peace, prevent conflict, and consider how militarism and armed conflict affect the environment and people because armed conflict and militarism have racist and gendered effects. The military contributes to environmental degradation for resource exploitation, land grabbing, arms production testing and weapon export. The military is the biggest fossil fuel consumer and carbon emitter in governments and it affects many contexts, particularly in the global south. Did you know that last year alone the military spending rose up to 2.1 trillion USD? The US military is one of the largest polluters and if it were to be seen as a country, it would be the 47th biggest polluter in the world, with more greenhouse gas emissions than as many as 140 countries.”

“Disarmament is the solution to solve the climate crisis. Let’s stand together. Let’s unite for demilitarization, denuclearization, decarbonization, and decolonization!” 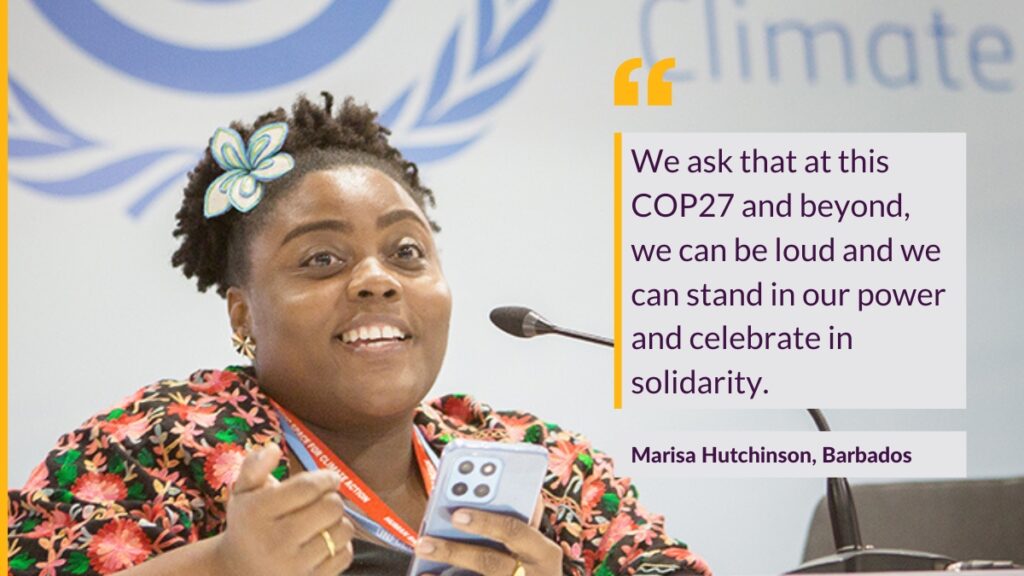 “For me as a Black Caribbean woman and a feminist, climate justice most importantly means ensuring climate reparations to people in the Global South, especially on the continents where they have taken all of our resources, and as those who are grappling with the harm and vulnerability of the changing climate. It also means protecting our lands from further development, and legacy beneficiation that exploited and extracted our previous generations. It means Caribbean civil society being resourced to mitigate, adapt, recover and whatever else they expect us to do as the Global North continues to carry out extractivism that causes the increased rainfall, intensified hurricanes and other disasters now twelve months a year and no longer six.”

“Climate justice means giving Caribbean people in all their diversity – whether Afro-caribbean and/or of Indian descent, or Black, or indigenous, LGBTIQ, gender non-conforming or non-binary, people living with disabilities or the elderly – space, and safe spaces to tell their stories and experiences of what climate change has done to them and their small island developing states.”

“We ask that at this COP27 and beyond, we can be loud and we can stand in our power and celebrate in solidarity – that is definitely missing here. This is because there is so much concerted effort on disinformation, control and silencing, and it continues in the UNFCCC space.”

“We are who we are — we are feminists, and we strongly believe in climate justice!” 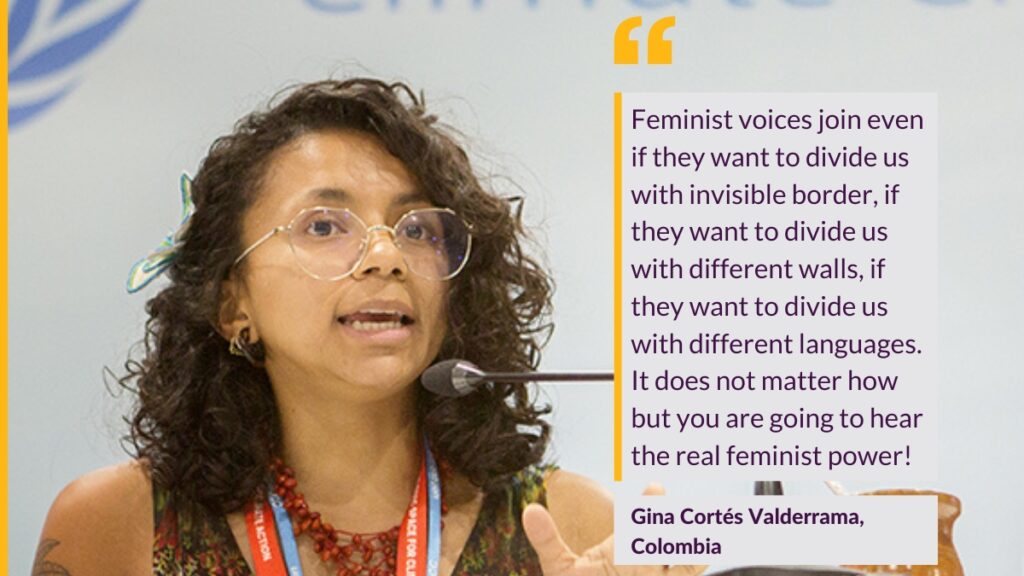 “Very often we as Latinas are told that we are too loud, that we are too radical for calling out the injustices of industrialization based on destructive models that are plundering, that are taking the land, the ecosystem of the communities. We are called loud and radical for calling out exploitation of our bodies as weapons of war. We have been called out as radical and loud for breaking the windows of those that have violated our integrity. We have been called loud for calling out rich and greedy corporations that are satisfying a never ending desire of growth, of accumulation of power for personal or individual interest. And if these are understood as being loud or as being radical, well, let’s be louder and be more radical.”

“In this space particularly we are not asking governments for their solidarity. We are asking for their responsibility for their historical and polluting actions. For the ecological debt that they have and that they are causing.”

“We are here as feminists asking for climate justice to stop those narratives that they are selling in the name of Green Revolution, in the name of a green industrialization. What it is actually looking for is to continue the same discourse of colonialism but dressed in a different costume. We need to stop that because we have to make clear the legacy of our ancestors that have been fighting strongly for us to be in this moment, speaking in this space. We continue their resistance with a fight and with raising collective voices. We do this in the memory of those that are not here in this space, but also for the present and future generations.” 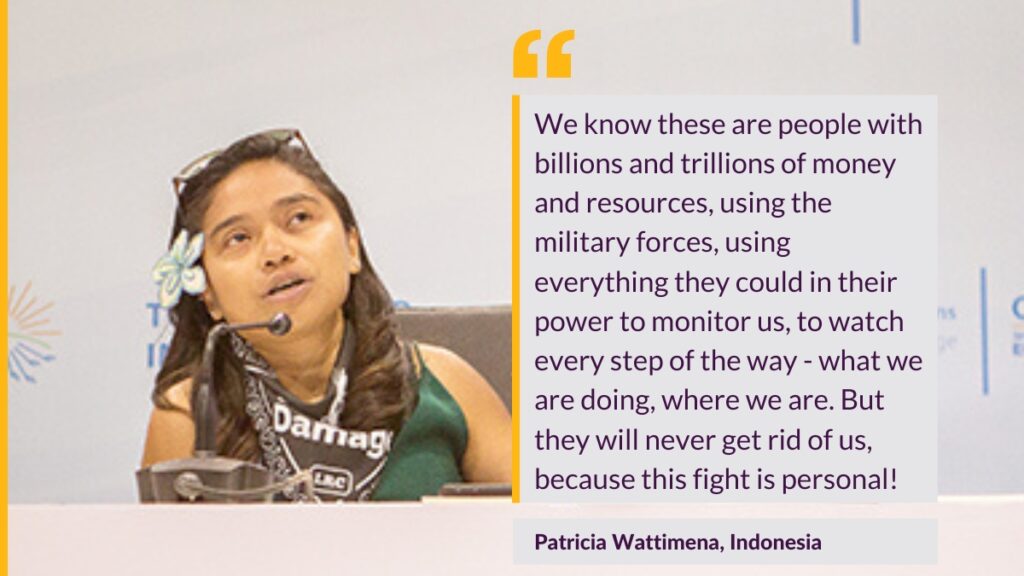 “If we ask ourselves, ‘why do we want to fight this difficult fight?’ We know who we are facing. We know these are people with billions and trillions of money and resources, using the military forces, using everything they could in their power to monitor us, to watch every step of the way – what we are doing, where we are. But they will never get rid of us, because this fight is personal! And you carry that to your grave. And when we go – when you go and when I go, we have to believe that our children and grandchildren will continue these fights for climate justice.” 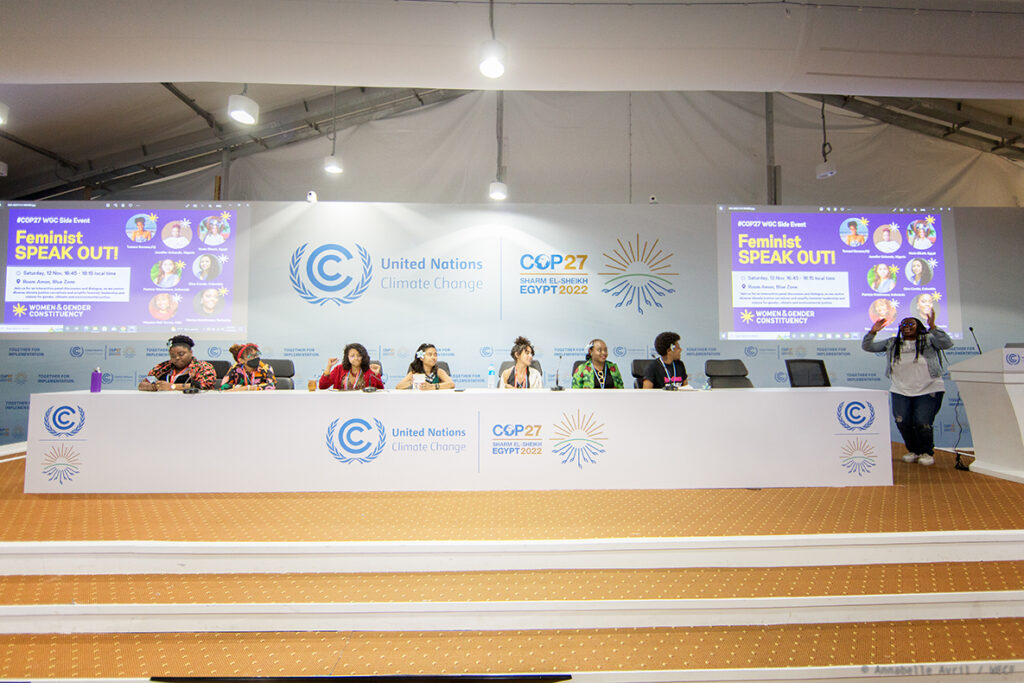 The discussion was an evening of celebration filled with songs of resistance, dancing, and a reflective conversation to share perspectives across geographic contexts and experiences. Through the evening, the aim was to deepen understanding of different contexts and entry-points of struggles within the environment, gender, and human rights nexus, influencing folks’ COP27 agenda, and celebrate feminist joy and resistance in the face of climate injustice.

All photos by Annabelle Avril/WECF.