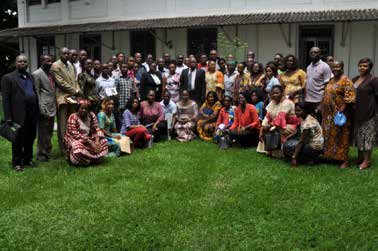 Description of the project: This project advocates in 4 regions of DRC for national authorities and customary leaders to acknowledge the rights of women on lands and forests and strengthen their participation in climate action. Based on an assessment of women’s legal land tenure rights and local practices, an advocacy tool was created and used for meetings organized between women in these provinces and ministerial authorities or local decision-makers. This led to the recognition of women’s role in forest management and community development, and the allocation of land for agroforestry projects.

Climate impact: Women are the primary users of forest resources for family and economic needs. Their utilization is central for climate issues (mitigation and adaptation). In DRC, the 2015 national law upholds gender equity in all sectors, which is what CFLEDD relies on. The project allowed an increased participation of women in climate actions in the targeted regions: Central Congo, Bandundu, Equator and South Kivu.

Gender impact: The acknowledgement of women’s role in forest management and economic development, resulting in the allocation of land for agroforestry, allowed them to be received by customary leaders and progress towards a change in gender relationships in access to land ownership. This project is now taken as a best practice example of how to involve women in public management. CFLEDD obtained the publication of a national regulation requesting all Ministries to establish a Gender Focal Point.

Scalability / replicability: CFLEDD intends on sharing the project’s results in all DRC provinces through public administration offices, provincial ministries, local NGOs, customary leaders and the private sector. It intends to integrate gender equality and women’s rights in the country’s land reform and implementation of REDD+ programmes. The chosen methodology can be replicated in a number of countries facing similar land and climate issues.