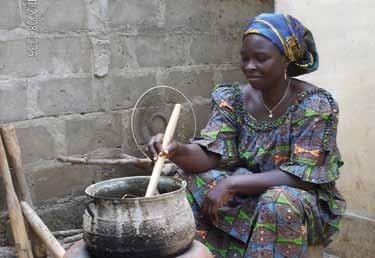 Description of the project: The project consists of the fabrication of traditional efficient stoves for cooking food. They enable a 40% CO2 emissions reduction compared to previous stoves. And instead of using coal, these new stoves use wood pellets, from wood recycling material which further reduces CO2 emissions. The project is led by four women who are responsible for the fabrication of the cooking stoves. 700 stoves have been built and sold to 700 benefiting households until today and 400 are in order.

Climate Impact: The climate impacts of implementing local solutions for deforestation problems include the reduction of fuelwood consumption and reducing CO2 emissions. An improved stove can reduce 40% CO2 compared to existing household cooking methods. A further advantage of the stoves is that they use wood pellets, which have a longer burning process compare to regular wood.

Gender Impact: The project provides employment to four women, who sell their cooking stoves in the market. The programme also reduces women’s traditional time burden in cooking and providing food for the family. The efficient stoves allows women to save time in the kitchen, so they can better provide for other needs such as education and health, for themselves and their community. Women‘s health has also improved directly from the stoves as they inhale less coal fumes than before. The project has benefiting 700 women and families so far.