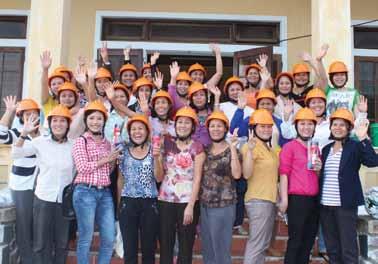 Description of the project: Affected by Confucian ideology, patriarchy remained dominant in Vietnam. It has been not only limiting to the development and social equality of women but also prevents them from taking part in disaster response and climate change adaptation even though they belong to the most vulnerable group. They are not considered eligible and often described passively as support recipients during disasters even though their experience and contributions are as valuable as men’s. Therefore, from 2014 –2015, Sustainable Rural Development (SRD) worked with 5700 women in 2 lagoon communes in central Vietnam to promote their voices and to include them in village rapid response teams as active contributors.

Climate Impact: The vulnerability of women has been increased in the context of climate change. They have found it extremely difficult to adapt and maintain life for themselves and for their families and their children. Through the project, 60 local women were added to the 12 village rapid response teams which previously only involved men. Furthermore, their participation is now recognized by local authorities as officially equal to men. It is encouraging to local women who can from now on have the same opportunity to go the trainings for capacity building in preparedness planning, first aid, communication, environmental protection, and adaptive livelihoods. Additionally, they have experienced trainings to enable them to reduce their vulnerability, to help the community be more responsive to disaster and to strengthen their community resilience.

Gender Impact: With women’s participation in the rapid response team, the perception of women by the men and by the community is positively changed. Women themselves feel more confident in speaking out in public and in participating not only in disaster response and climate change adaptation but also in many other activities in the community. Women are now highly appreciated by their families and society. They are mentioned as skillful and patient campaigners in disaster response and as creative and hardworking in climate change adaptation. Thanks to this, local men are now more aware of sharing housework with women than before. Women’s voice and position as well as decision making powers in the family and community are thus strengthened and leveraged.