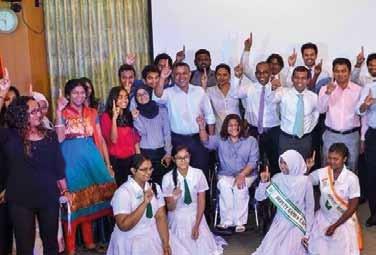 Description of the project: Voice of Women has continued to advocate about the importance of democracy and a good governance system to address climate change effectively. In particular, the negative effects on women who are disproportionately impacted. For three short years under the first democratic president, women were empowered. After the coup d’état that overthrew the democratic government in 2012, women collectively took to the streets in numbers never seen in the history of the country. They organized to call for fresh elections and continue to call to restore democracy in the country.

Climate Impact: Under very difficult conditions, VoW was the only NGO in the country that addressed climate change and democracy. VoW worked to make the issue a bipartisan issue and held the first event, “Women Organizing to Address Climate Justice“ in partnership with WECAN, an event that was attended by former President Nasheed and the current environment Minister who signed the WECAN declaration at the same table. VoW continued its advocacy work not only on the area of gender and climate change but also on protection of basic human rights and women‘s rights in the Maldives.

Gender Impact: Climate Change is a human’s rights issue for everyone, but we have seen that it puts a heavier burden on women than men. During the 2004 tsunami, we saw first-hand, the effects of women displaced and forced to live in temporary housing. These women were subject to sexual assaults, harassment and abuse; access to reproductive care such as safe facilities to give birth and take care of children were not available. Climate Justice is understanding that these inequalities add an unfair burden on certain groups of people as a result of climate change and tries to make arrangements to alleviate these burdens, taking these inequalities into account while taking adaptation measures. VoW continues its work to raise awareness on the issue both domestically and internationally.