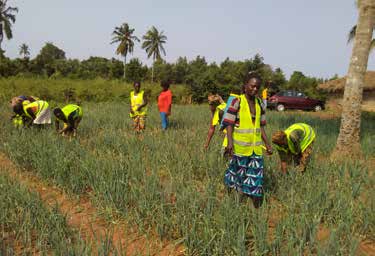 Description of the project: In Togo, land degradation has increased in the past few years due to extreme climate events that dramatically affect the lives of rural women. WEP-TOGO offers technical and financial support to 4 groups of women farmers in the Vo district in order to build their resilience. The project led to an improvement in the economic conditions of the beneficiaries and in their knowledge of good agricultural practices to increase soil humidity and fertility and adapt to climate change: 120 women farmers were trained and supported to produce mushrooms and irrigated market gardening.

Climate impact: Thanks to conducted activities, the 120 women farmers were able to face times of drought with irrigated agriculture. The use of organic fertilizers based on mushroom substrate allowed crops to resist the impact of climate such as irregular rainfalls or times of drought. Women farmers were therefore able to exploit 4 ha of agricultural land and greatly improve their production, according to their own testimonies.

Gender impact: The women who were trained acquired essential agronomic competencies they can transmit to other men and women farmers. The men and the young people in the beneficiary villages have been trained as well on gender and how to contribute to women’s success; thus men and young people supported women in several important areas, like building roofs for sheds, setting up the market gardening site, men and traditional leaders donating land to women for their crops.

Scalability / replicability: This project could be reproduced in other areas of the region, as well as other West African countries. Work has already started with other groups of women farmers in other villages in this district, with the support of the French Embassy. The local demand for support by WEP-Togo is strong. Beneficiaries have become transmitters of these good practices and are now involved in supporting other women in their area and sharing their knowledge.