At COP25, the WGC and member organizations sponsored the attendance of nine advocates who applied through an open call for feminist climate activists who wanted to engage with the WGC. These activists are featured below, and they worked alongside other advocates from the WGC member organizations and network to showcase our feminist work and share our demands with the negotiators in Madrid. Future opportunities to be sponsored to attend climate negotiations with the WGC will be shared via our advocacy listserv: sign up here! 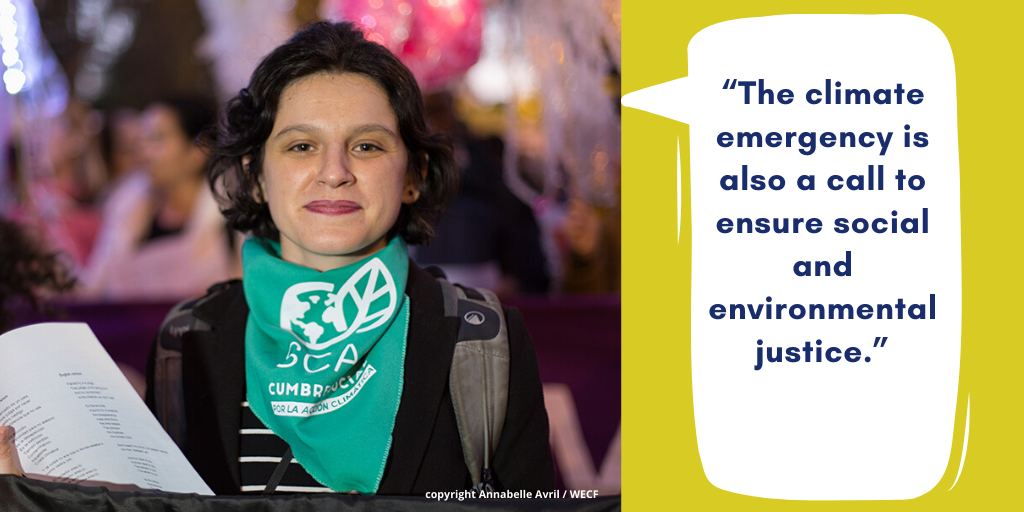 Antonia is Chilean geographer and holds a master’s degree in Anthropology, Environment and Development at University College London. She works at the Observatory of Social Inequalities at Diego Portales University and has been co-designing and coordinates the project “School of Female Leaders in Socio-environmental and Territorial topics”, implemented for women from rural areas of Central Chile. Her work bridges the gap between academia and social movements by analysing environmental problems, their actors  and and processes, as well as gender dynamics, both in private and public spheres. “Throughout all this, I am guided by a deep commitment to local communities, feminism and environmental justice.” 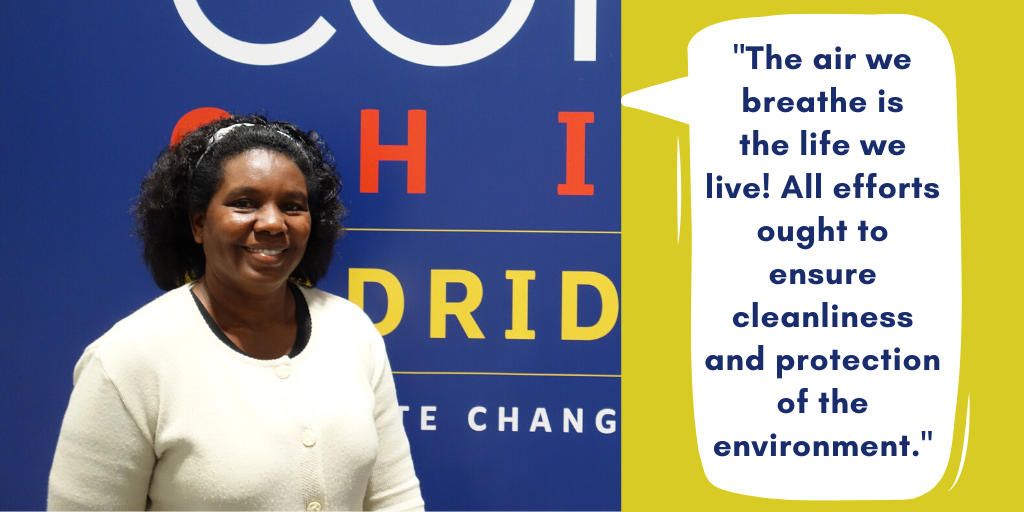 Fredica is from Uganda in Africa and believes in cleanliness! From the air we breathe, the food we eat, the water we drink to the words we speak, everything must be clean. She works with rural women farmers mentoring and empowering them to demand justice in all aspects of development. “No human being has the authority to pollute and contaminate our air, our environment, our mother nature” she says. She sees the role of women in defending our air and elaborates that we shall achieve this by jointly speaking and raising our voices to the air polluters and environment destroyers. 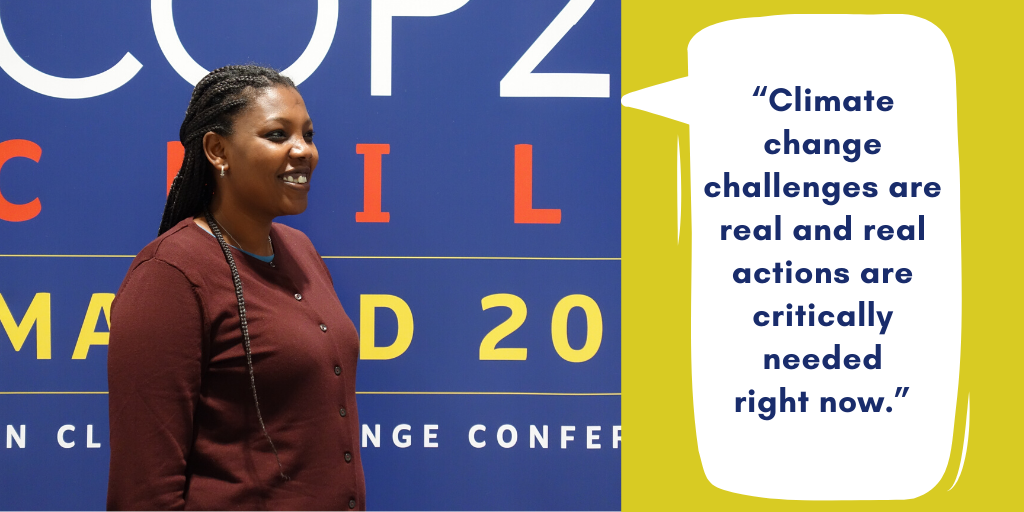 Lilian engages in climate change dialogues at COP25 with interest on issues concerning women and indigenous peoples. “Pastoralists and rural communities back home in Tanzania are affected by prolonged and severe droughts which are affecting their livelihoods as well.” She criticizes that the Global North profits from years of industrialisation while the pollution affects and challenges poor communities the most. While the UN Climate conferences have been going on for the past 25 years, Lilian does not see real commitments and implementable actions that will reduce greenhouse gases. “Full financial support is needed, so countries in the Global South have the capacity to mitigate climate change threats.” 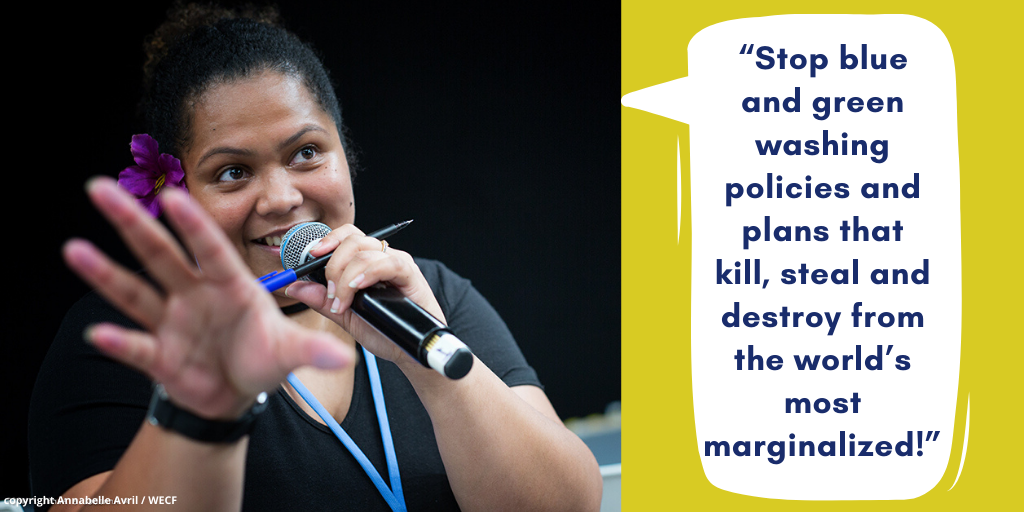 Kelerayani Gavidi (or Kele as she is best known) is a passionate Pacific young eco feminist who believes that respect for and the recognition of women and young women’s roles as key first responders in climate change emergencies and humanitarian work is crucial and necessary. “Let’s talk real when we are discussing women and girls lived realities and how all stakeholders must be held accountable for the impacts climate change is having on our most marginalised and vulnerable groups! We want climate justice for all women and girls of all diverse backgrounds and if we don’t get it then SHUT IT DOWN!” 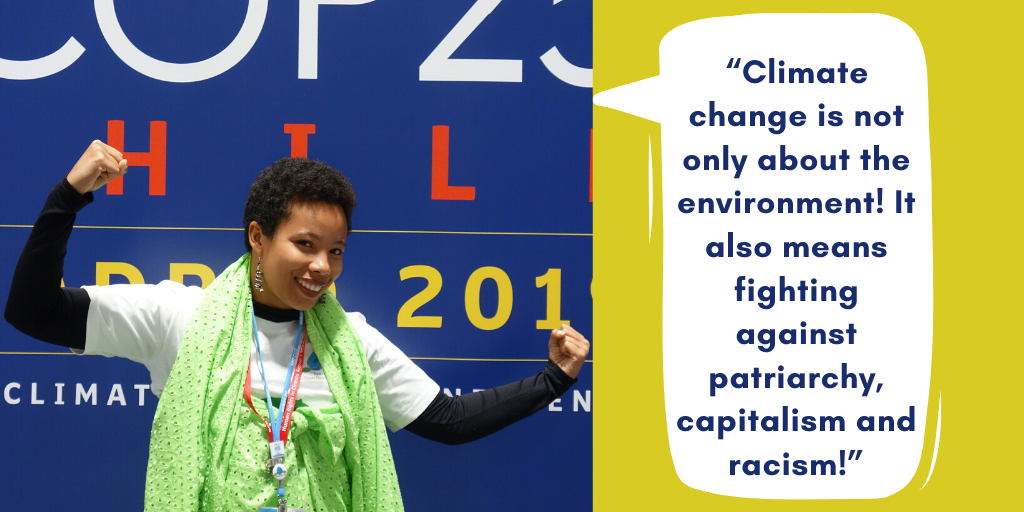 Marie Christina is a young climate activist and social entrepreneur from Madagascar. As an ecofeminist, she’s fighting for inclusion and diversity. Convinced that it’s time to change our economic system based on profits, domination and exploitation she is mobilizing to promote a blue, sustainable and inclusive economy that values low tech in order to benefit local and vulnerable communities. “It is not a question of going back to candles or to the age of the caves, it is about rethinking innovation, orienting it towards saving resources, preserving and restoring ecosystems, and making it accessible to the greatest number of people”. 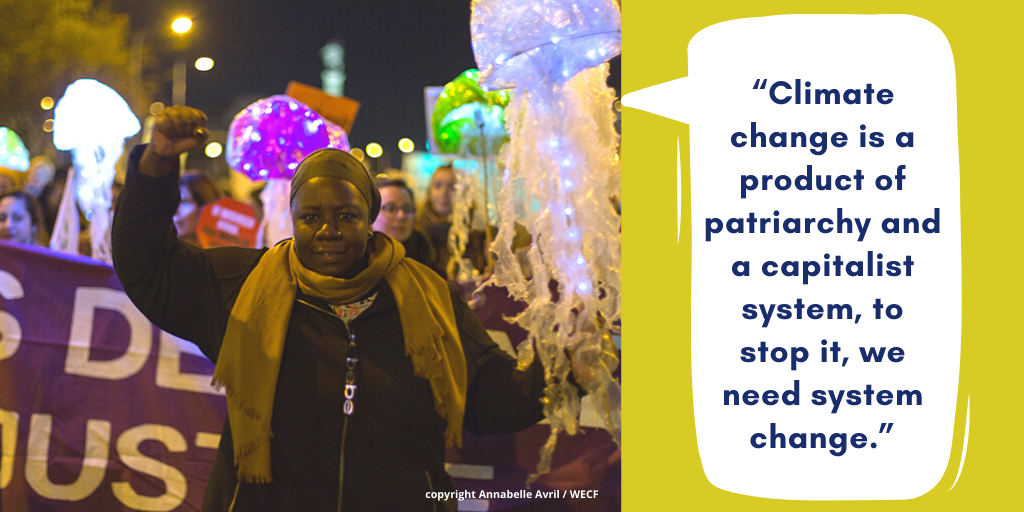 Mwanahamisi Singano is a african feminist passionate about ending intersectional injustices by challenging two interrelated systems of oppressions and exploitations: ‘patriarchy and capitalism’. Ms Singano believes the patriarchal ideals of ‘power’ merged with capitalist ideals of over consumptions and monopoly of resources have fueled injustices across gender, race and class and destroyed the earth beyond repair.  “Ending climate change emergence and crisis, demands systematic change of the systems of exploitation, oppression and extraction” she says. 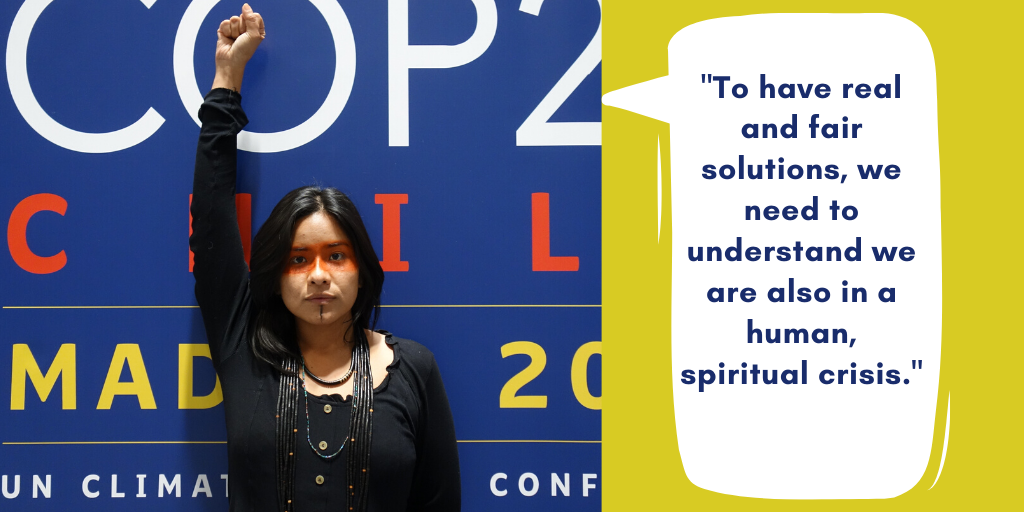 Taily is a indigenous youth women of the Terena nation of Brazil. As part of the National Council of Indigenous Women, Taily is at COP25 to address the issues that indigenous peoples are facing with the climate crisis in their communities especially the women and youth. She believes that is time for action and despite the lack of ambition of governments,  and the differences of nations we need to work together as one. “There is no other mother as mother Earth.” She advocates for human rights, indigenous peoples rights and gender equality to guarantee a just transition. 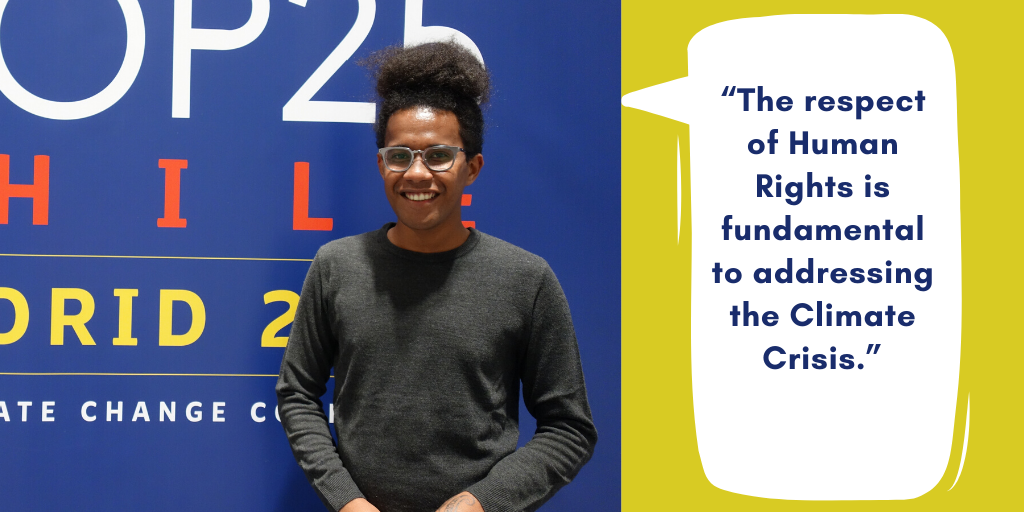 Tamani is a young, indigenous, gender non conforming climate justice activist from Fiji who is concerned about the violations of human rights during climate disasters. Coming from a region (Pacific) with more than 60% of women having experienced gender based violence, the issue only escalates in such vulnerable conditions.“For Pacific people climate change is not a stand alone issue. It intersects with their health, their land and their lived realities of violence”. Through their youth network (Fiji Youth SRHR Alliance), young Fijians are empowering each other of their basic human rights including the rights to their sexual and reproductive health. 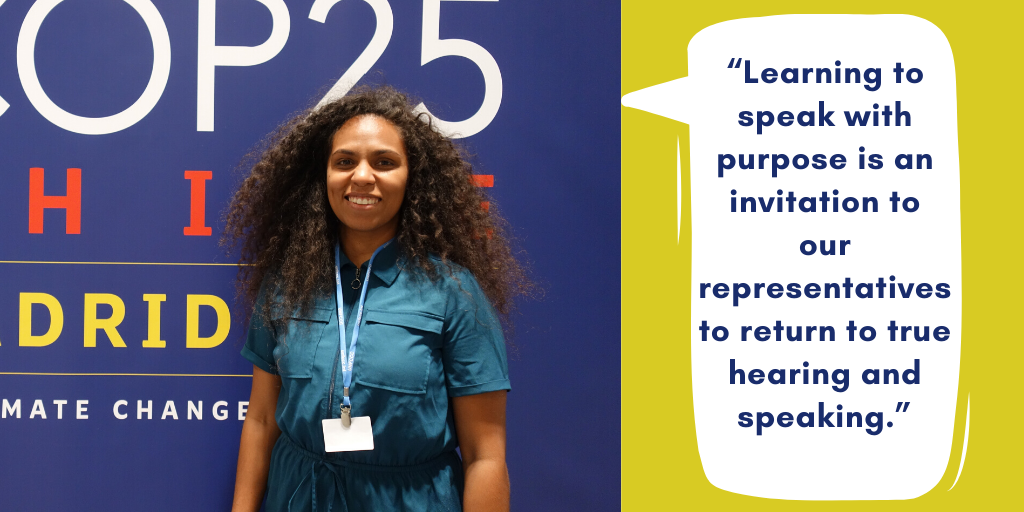 Yolène’s presence at COP25, as a expert for the Customary council of Djubea Kapumë, allows her to lay the groundwork for the action of New Caledonia with regard to discrimination against  indigenous women, particularly with a high rate of femicides.  Knowing that women are those who carry the breath of life and who transmit ancestral knowledge, adaptation to climate change, either at the level of human rights, social rights or economic rights, she is worried about a general lack of awareness. ”This lack of protection of our fundamental rights and a lack of enhancement of gender equality affect our actions as mothers, daughters, in the face of the climate crisis.”