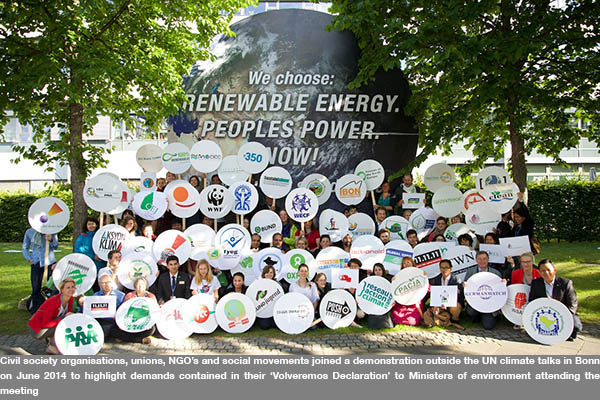 BONN, GERMANY (June 6, 2014)– More than 100 people held a demonstration in Bonn today, outside the hotel where the Ministers of Environment were meeting at the UN climate negotiations.

Organisations from every continent – including trade unions, social movements, environmental groups, gender and youth groups, indigenous groups and NGOs –are demanding action by the more than 198 member governments of the UN Framework Convention on Climate Change (UNFCCC).

The demonstration in Bonn is intended to show the growing public support for climate action and a just energy transformation. The groups held a banner: “We Choose: Renewable Energy. People’s Power now!

Anabella Rosemberg, International Trade Union Confederation (ITUC)climate advisor said, “In Warsaw, we left because governments were not taking their responsibilities to tackle climate change seriously. We came together again here in Bonn, across very diverse groups to tell them we’ll not surrender until we build the strong climate movement we need, one that pushes for a just world, for the jobs of the future, and for a planet that is preserved for future generations.”

The Declaration continues that, “the walk out was an act of protest and indignation over governments’ continued failure to take decisive and swift action against the biggest threat to both people and the planet, and an act of condemnation of continued domination and sabotage of the international climate talks by powerful corporate interests.”

Lidy Nacpil, Director of Jubilee South – Asia Pacific Movement on Debt and Development, from the Philippines said, “These negotiations are a matter of life and death for many who live in vulnerable countries – where worse typhoons and droughts mean much more suffering. We will continue to take action against those who claim to be leaders, calling on them to take up our solutions and beat back the vested interests that want business as usual and dress it up as progress.”

“We have come together to reiterate to all “leaders” in the UN climate negotiations that they are dangerously off track in addressing the climate emergency. We are calling on them to listen to the demands and solutions of people,” the Declaration says. “We  are back, far more strengthened in giving voice to those who are already acting with the urgency needed to avoid the worst impacts of climate change.People are mobilizing everywhere and taking to the streets in bigger numbers and increasing intensity to stand up to vested interests and fight for their future and those of the next generations.”

The Declaration lists 7 specific demands of the groups, and then concludes,“the global climate movement is building its strength and power in every country of the world. We call on those who claim to represent us to either act in our interests or step aside.