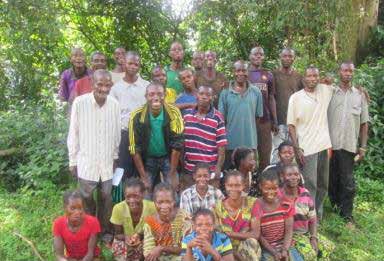 Description of the project: The Batwa Pygmies are discriminated against in DRC, particularly in their access to traditional forests, often overexploited. This project aims at restoring forest ownership by Pygmy populations (1,600 beneficiaries) and biodiversity in the Equator province by planting trees that host edible caterpillars in two forest areas of 100 ha each. Caterpillars used as food produce can mitigate food insecurity due to the loss of crops and generate a source of income for indigenous women. They are trained to rehabilitate damaged ecosystems and manage forests rationally and sustainably.

Climate impact: The Batwas’s community forests suffer from increasing deforestation due to industrial overexploitation and soil impoverishment through unsustainable agricultural practices. The project aims at fighting deforestation by rehabilitating local plants: planting trees that host edible caterpillars allows for successful restoration of the forest biodiversity. The project aims at a total annual production of 25,000 tons of caterpillars which could yield an annual income of up to $3,750,000.

Gender impact: The project is led by FECOFFA, an indigenous women’s organization, ensuring them total integration in the decisional process. Furthermore, FECOFFA trains indigenous families – women and girls primarily – to plant trees that host edible caterpillars, reinforcing their knowledge competencies. The income generated by the project also aims at improving the autonomy of the Batwa women involved.

Scalability / replicability: The project aims to limit discriminations suffered by the Batwas in the decisional processes related to forest exploitation in Congo and, in a broader scope, to reinforce the respect of specific indigenous peoples rights in policies linked to REDD+. The project was implemented in 4 villages: Bowele, Bolama, Bokenge and Boala Ngombe. Its economic model is simple and replicable.