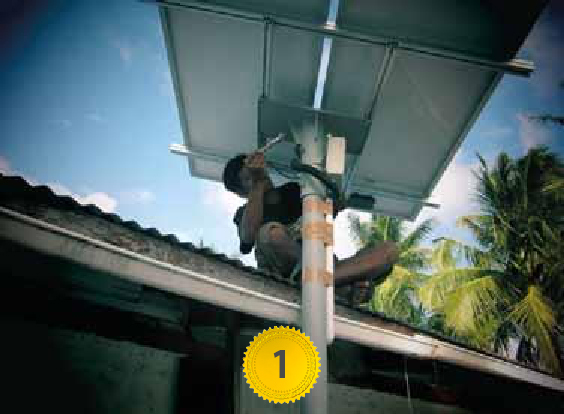 Description of the project: Young women participated in the assembly, delivery and installation of solar powered lights, refrigerators and freezers on two atolls in the Marshall Islands. The young women independently learned how to master technical elements, assembly methods, and packing and delivery of the components across oceanic distances to remote islands. They also gained competency in the off-loading, re-assembly and installation of mechanical and electrical components.

Climate Impact: The project has both mitigation and adaptation impacts. It supports mitigation by substituting renewable energy generation for the very costly and largely unavailable fuel used to power diesel generators. It supports adaptation by enhancing food security on very remote islands impacted by adverse effects of climate change including frequent drought, salt water inundation from King (high) Tides and increased storm surges. It also alleviates the hardship of remote existence and the challenges to traditional fishing caused by lack of access to fuel and increased storm surges.

Gender Impact: Young rural high school educated women were trained in the skills of electrical and mechanical assembly and the commissioning of solar PV systems. This training for women is uncommon as, especially in the Pacific Islands, it is a male dominated area of work. These young women also supervised the installation of solar photovoltaic refrigerators in their own homes. As women are the primary users of home refrigeration, women in the community were involved at each household. This is the first such activity in the Pacific Islands.